In 2019, the Millstein Center launched its Counter-Narratives Project, which focuses on alternative theories to the conventional shareholder primacy paradigm—the theory that shareholder interests should be prioritized above the interests of all other stakeholders (including debtholders, employees, customers, suppliers, the environment, the community, and the corporation itself). While many agree that one economic purpose of a corporation is to maximize value for all of its stakeholders in the aggregate over a long-term time horizon, this view holds that shareholders’ interests must always take precedence.

The alternative theories, or “counter-narratives,” are critical of shareholder primacy and argue that such a view encourages “short-termist” actors and behaviors which have contributed to economic malaise and a maldistribution of wealth. These counter-narratives propose various methods of balancing the interests of all stakeholders and measuring the success of a corporation through means other than simple shareholder wealth maximization.

The complex task of mediating the interests of intra-firm constituencies is complicated further by the fact that the role and structure of corporate ownership is being reshaped in a manner not seen in over a century in two significant ways. First, ownership of public companies is increasingly concentrated in the hands of a specialized group of institutional investors and asset managers; in turn, an increasing share of such holdings are managed “passively” to track the performance of broad-gauged market indices. Second, an increasingly large share of innovative enterprise is being funded by private capital markets rather than public markets, and capital markets are evolving in ways that facilitate such private ownership choices. (The Millstein Center is exploring these shifts specifically through our Future of the Corporation Project.)

As ownership changes, the governance sub-institutions that serve the broad objective of maximizing value will necessarily change as well. Debates that have traditionally been addressed through an increasingly strained shareholder-based model now fall even more woefully short of the task of addressing pressing contemporary questions, such as:

A carousel is a rotating set of images. Use the previous and next buttons to change the displayed slide 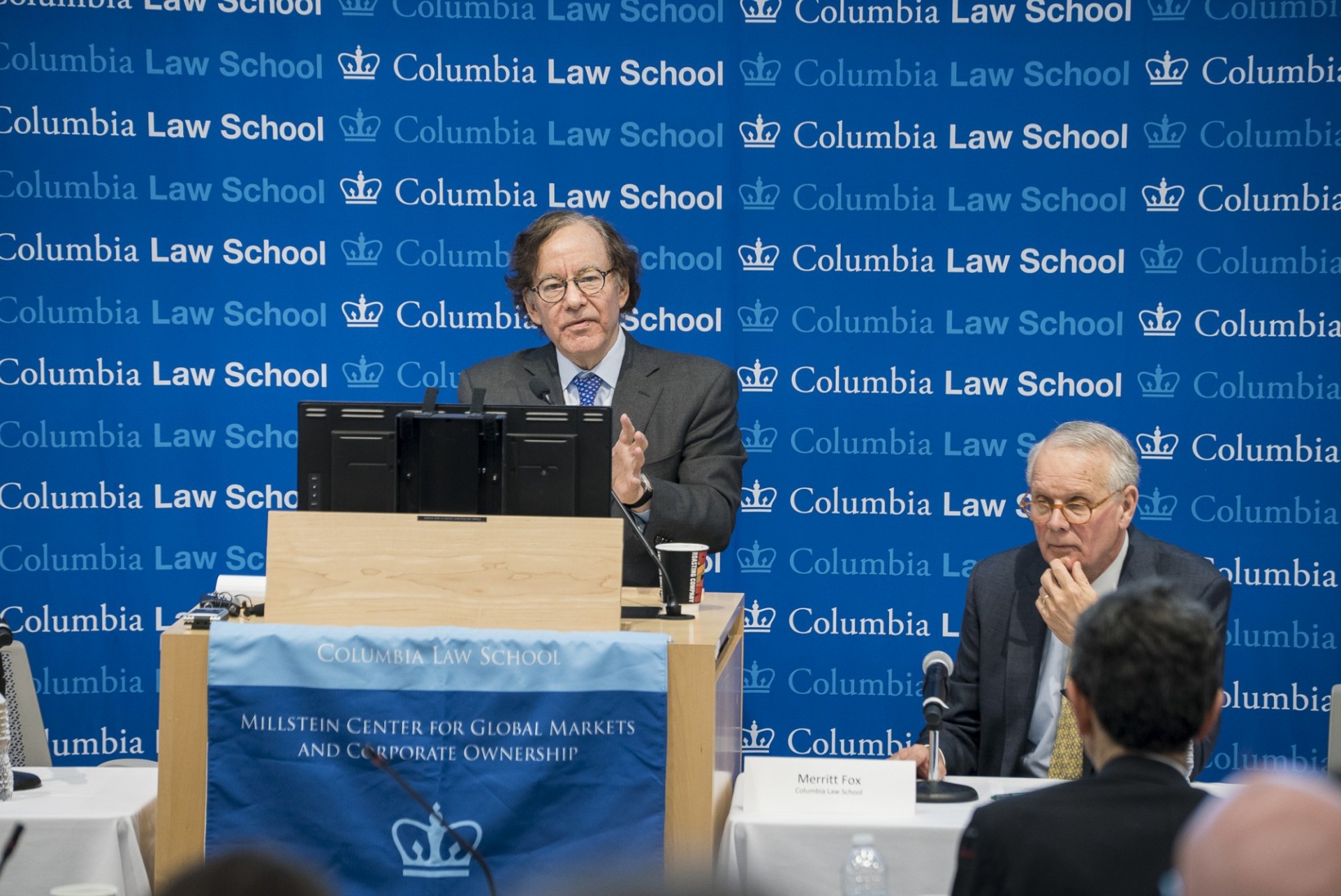 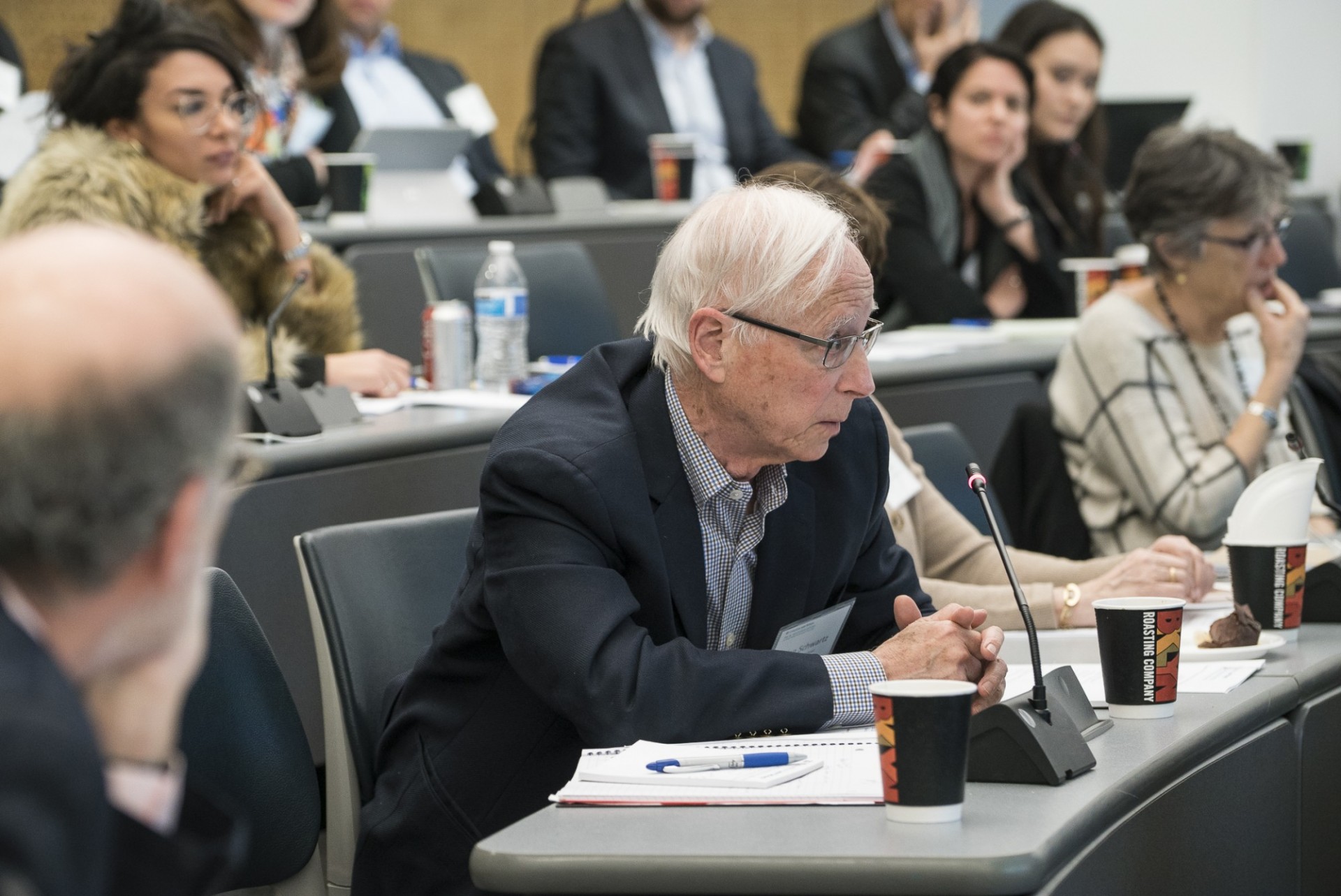 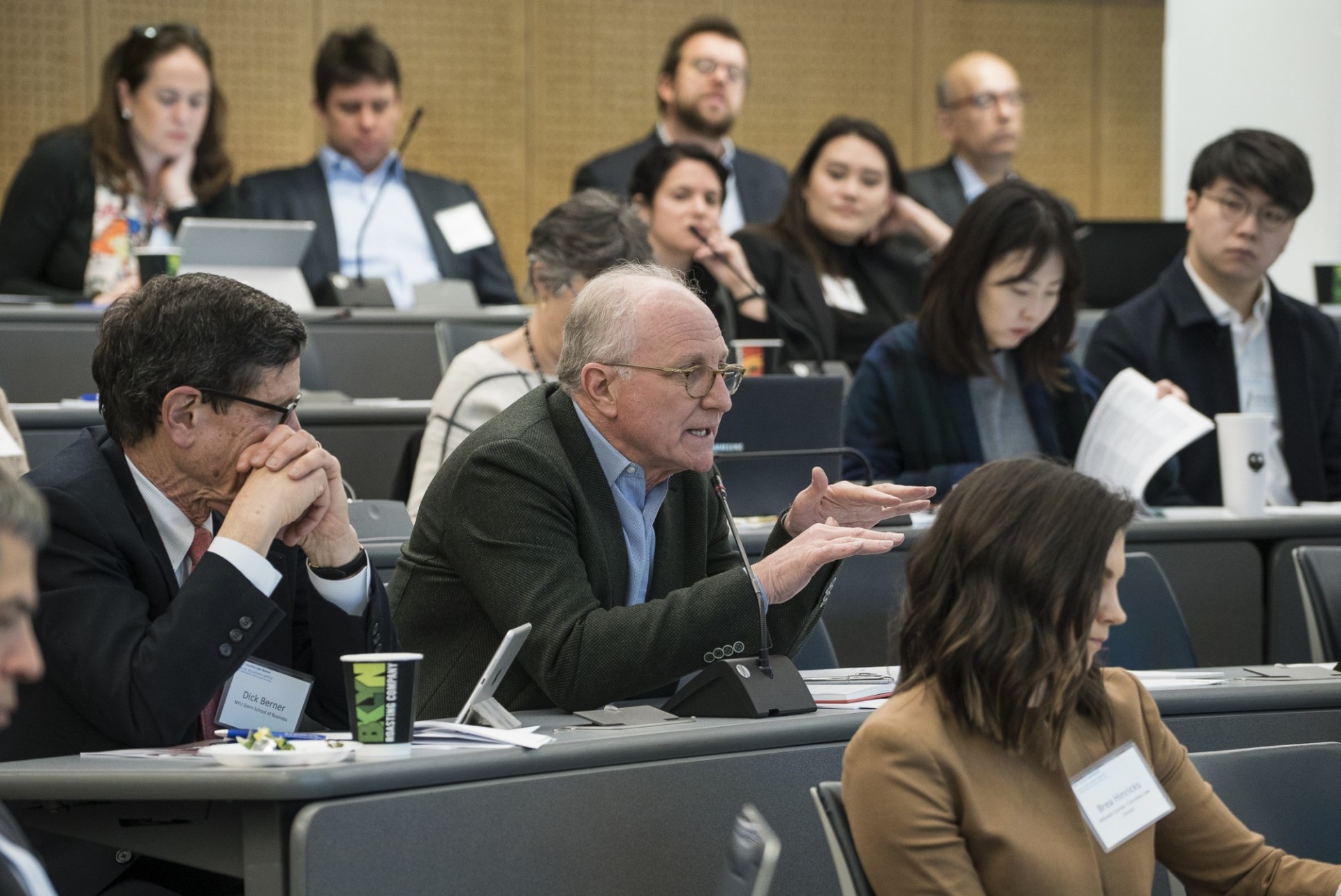 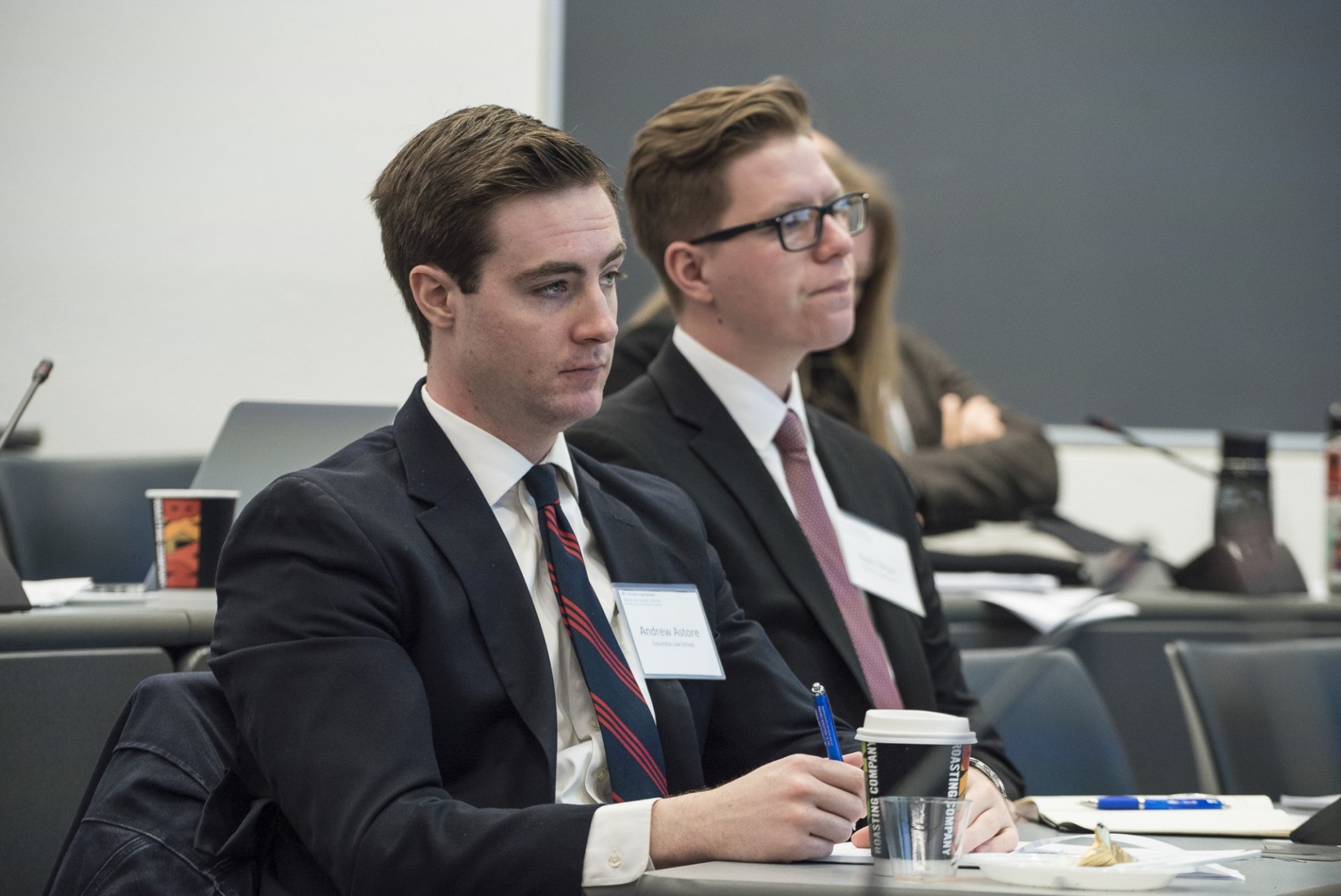 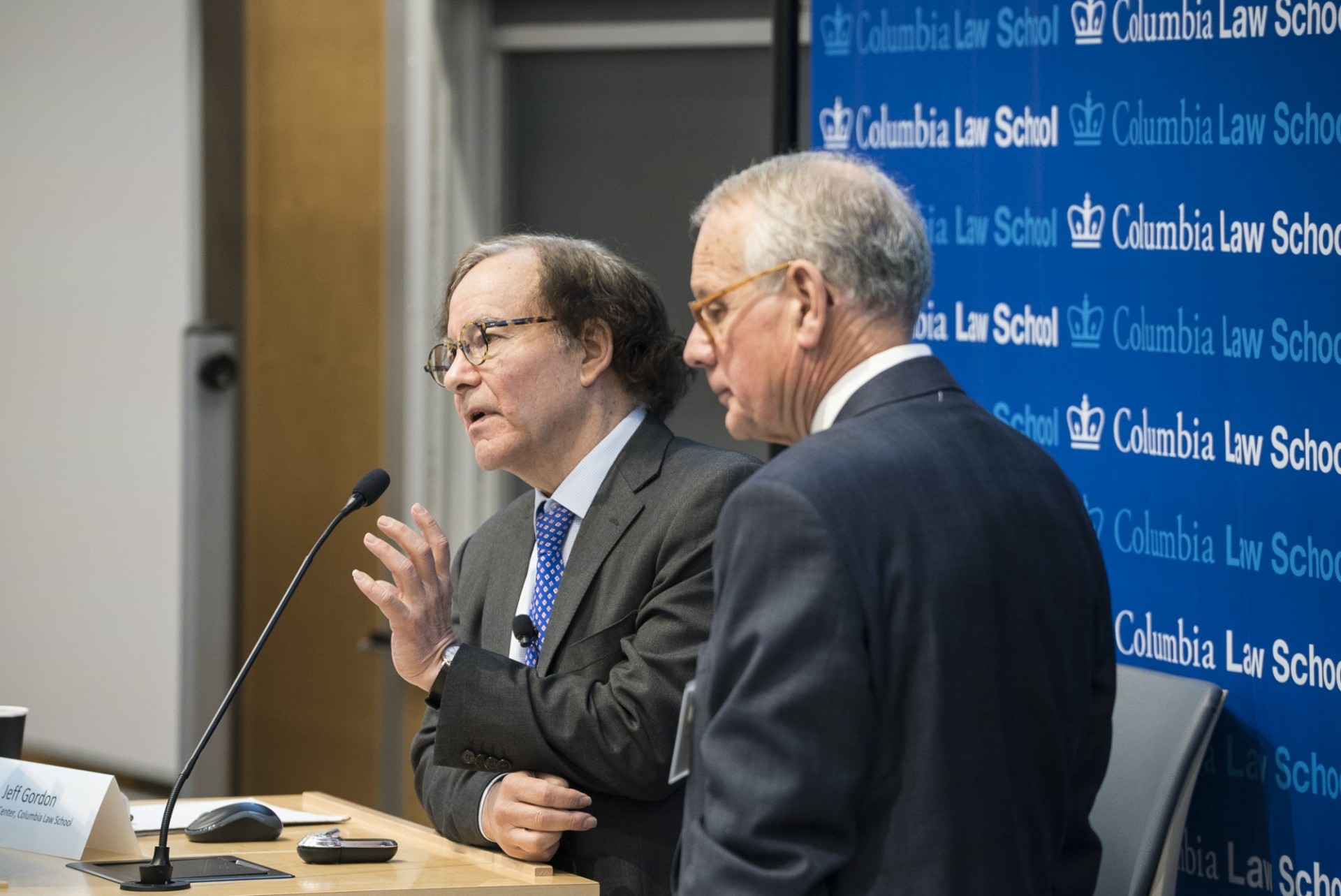 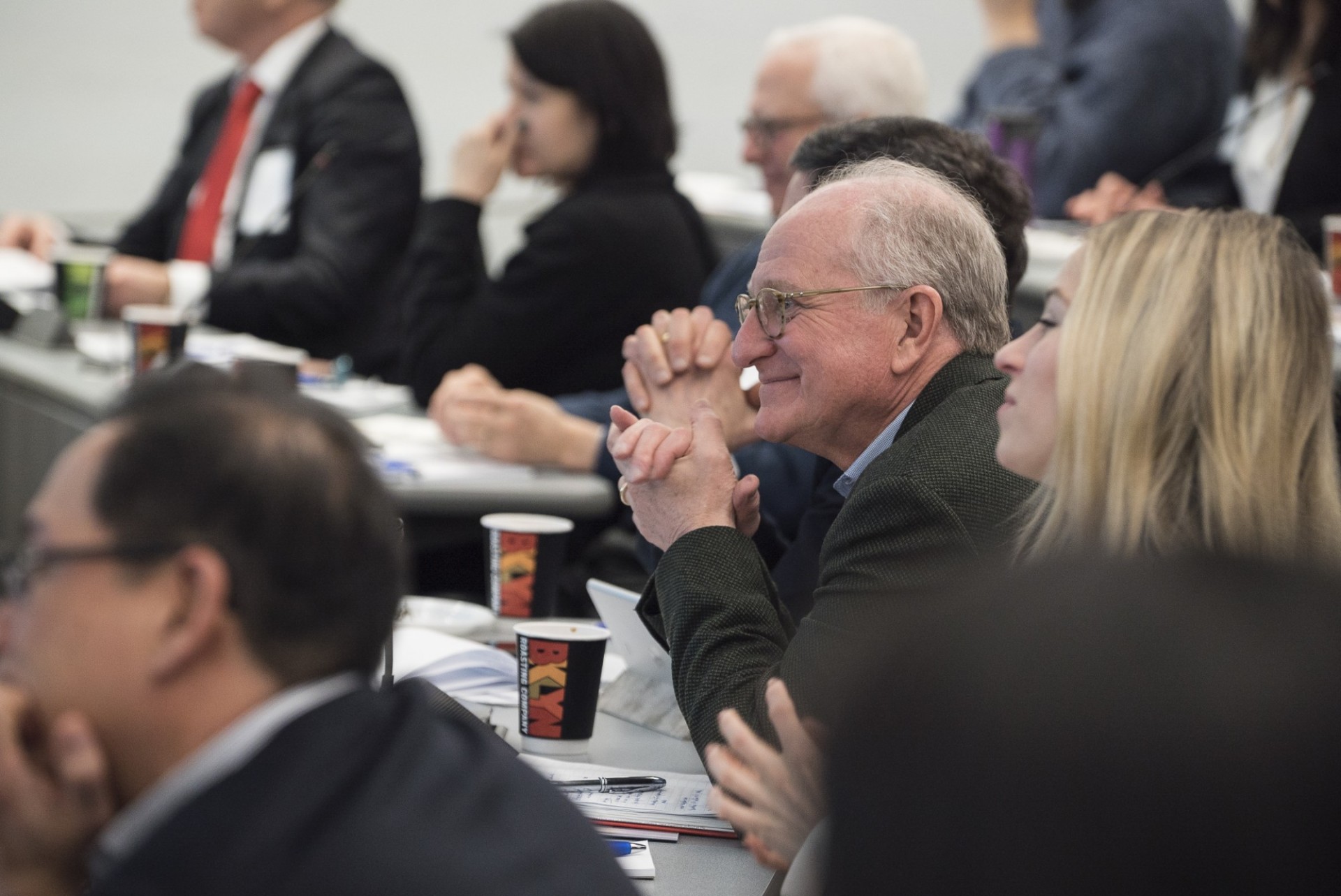 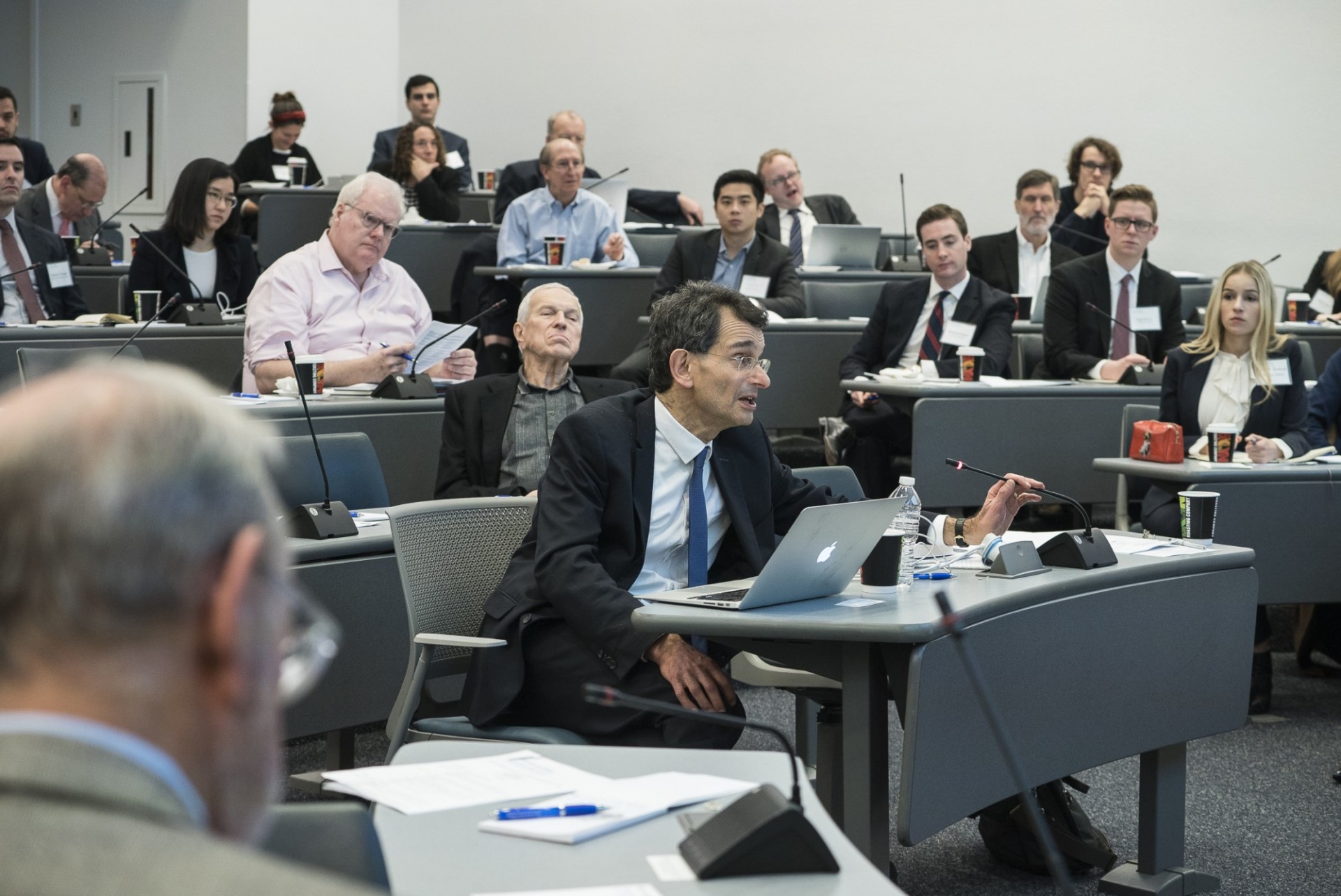 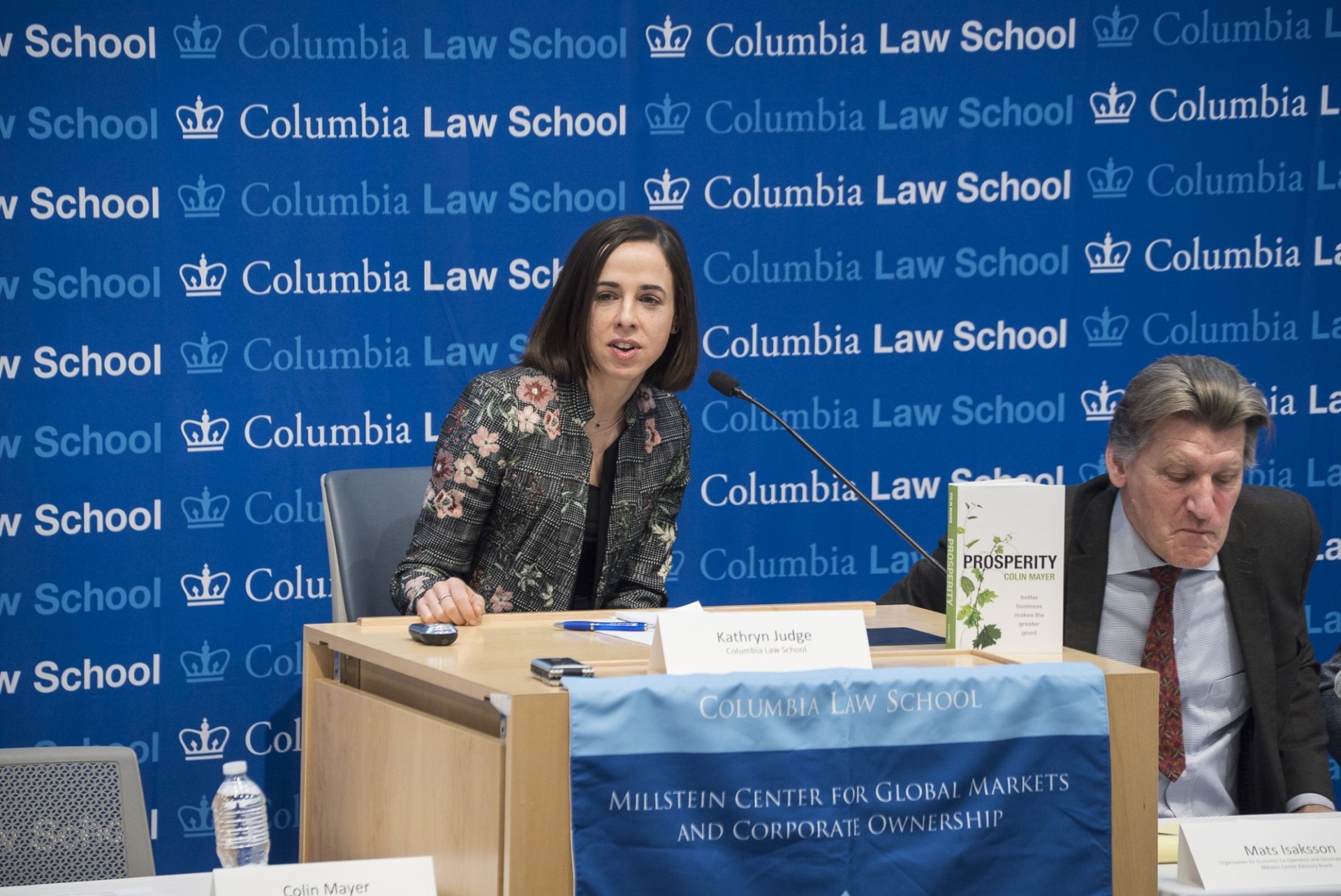 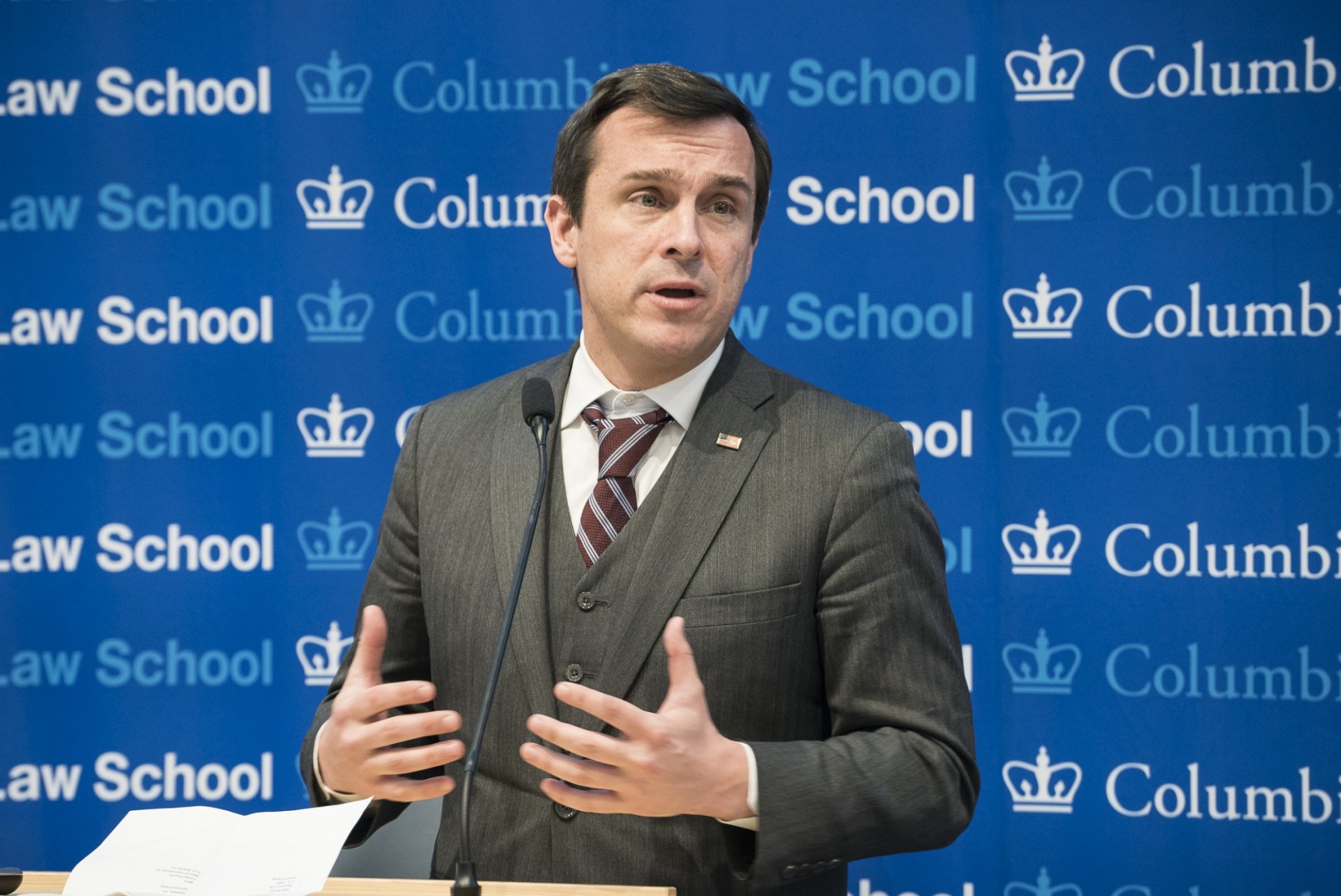 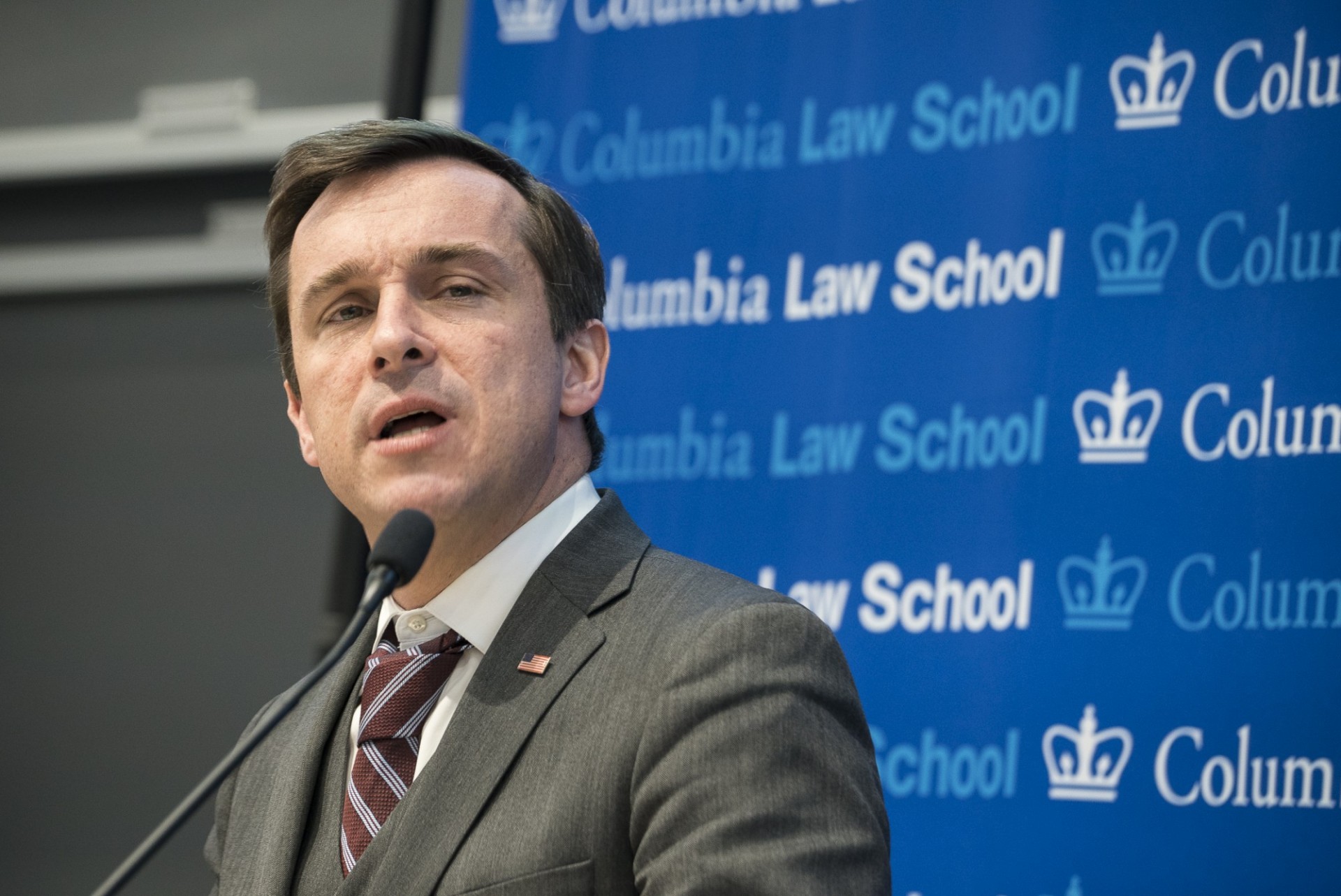 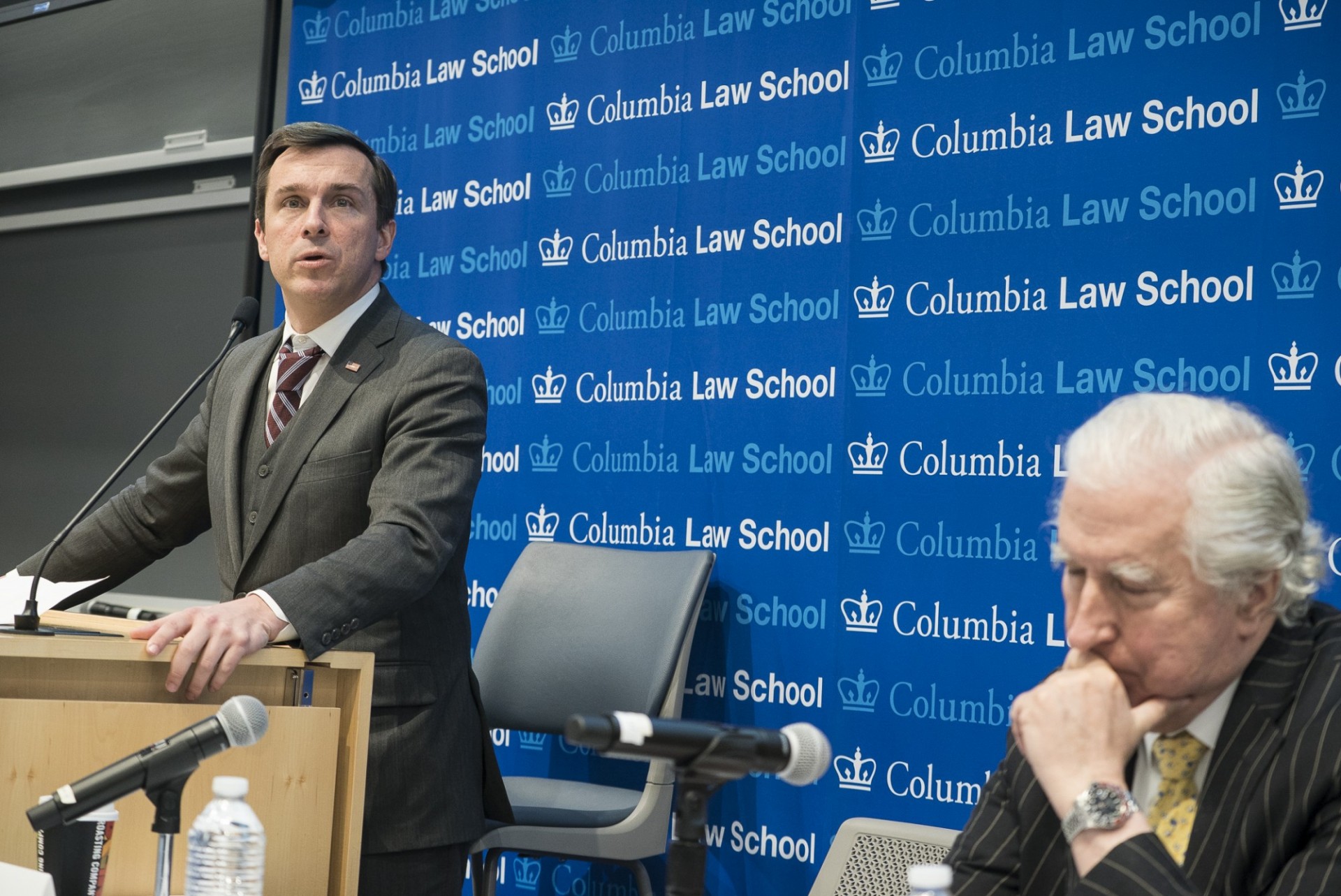 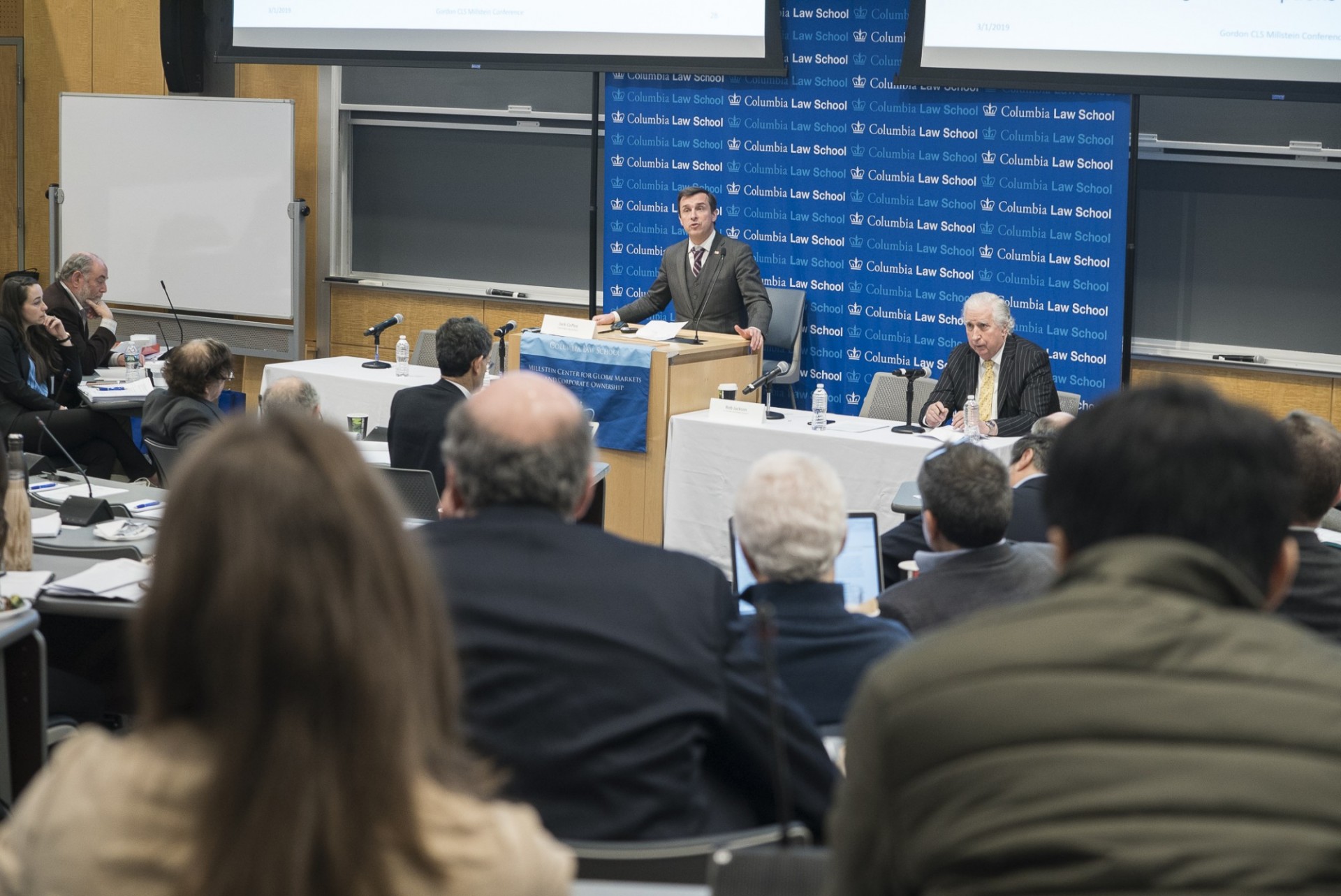 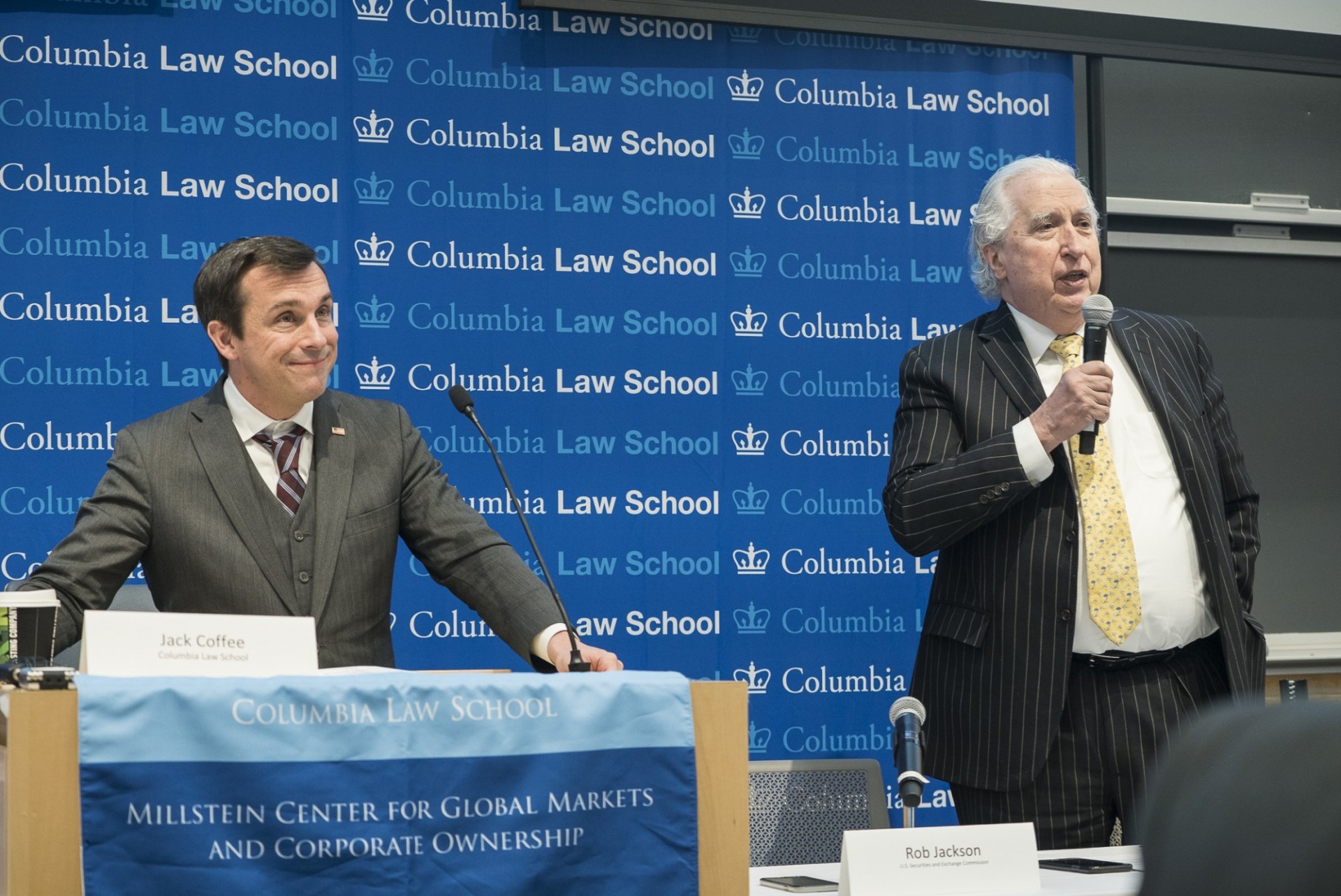 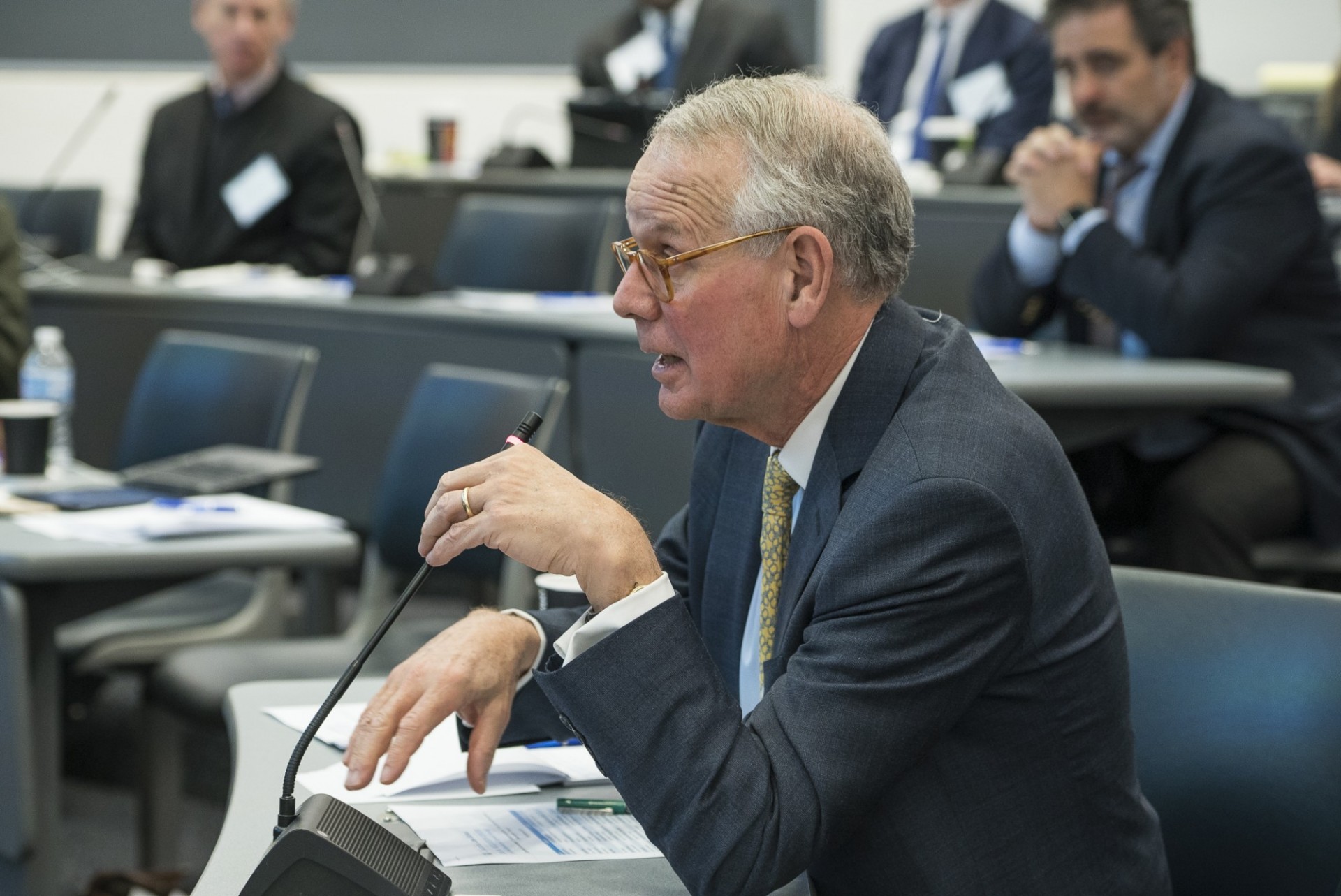 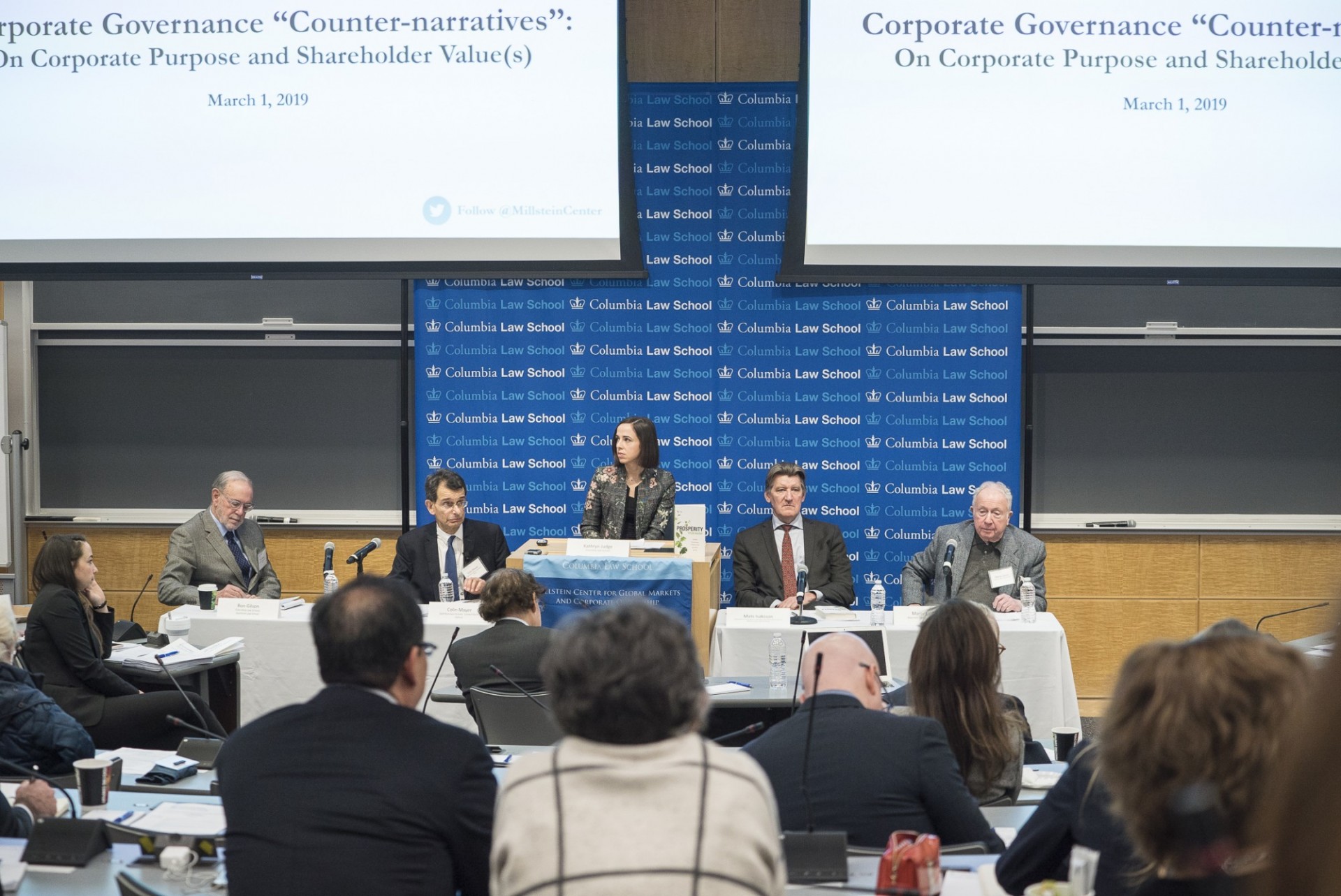 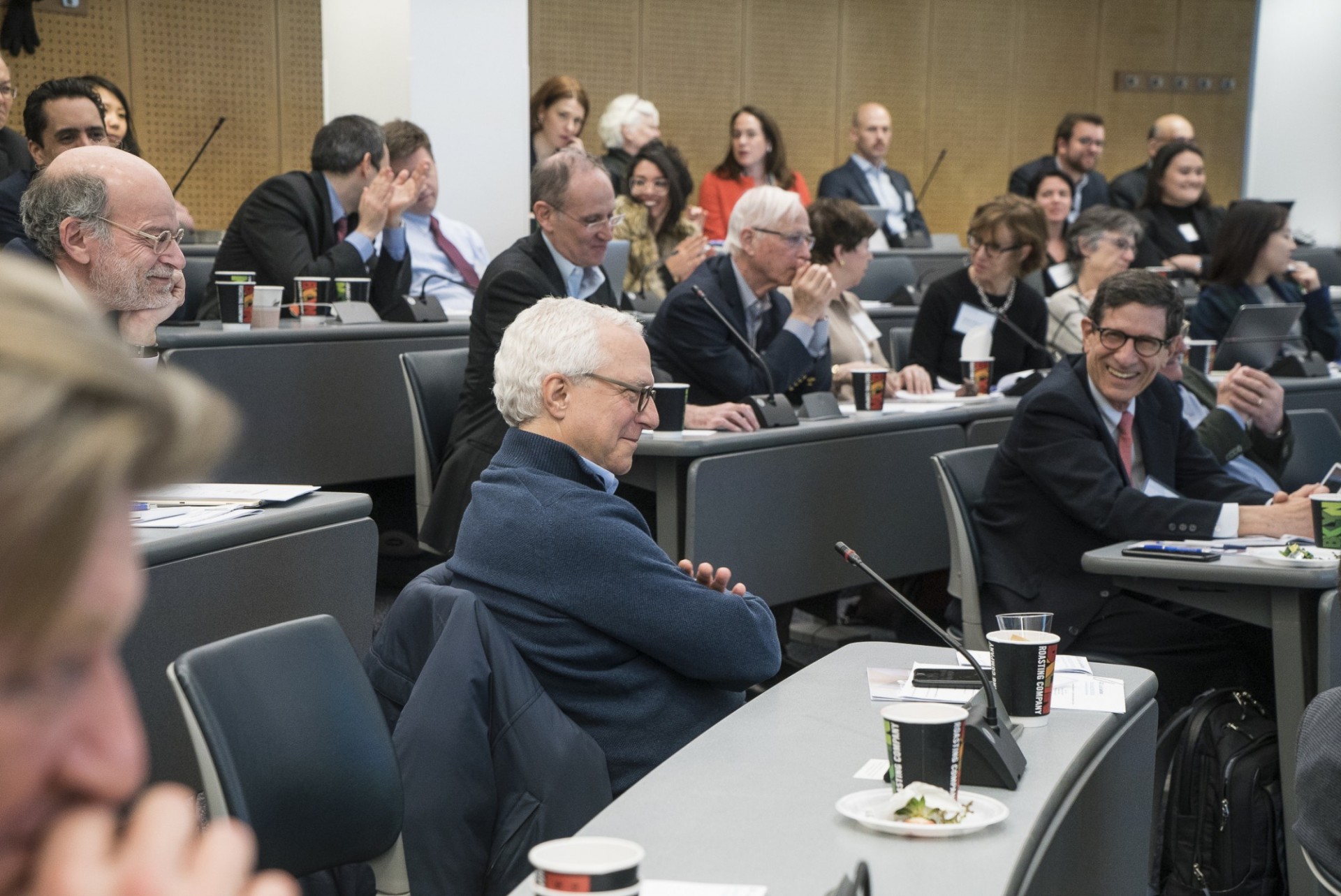 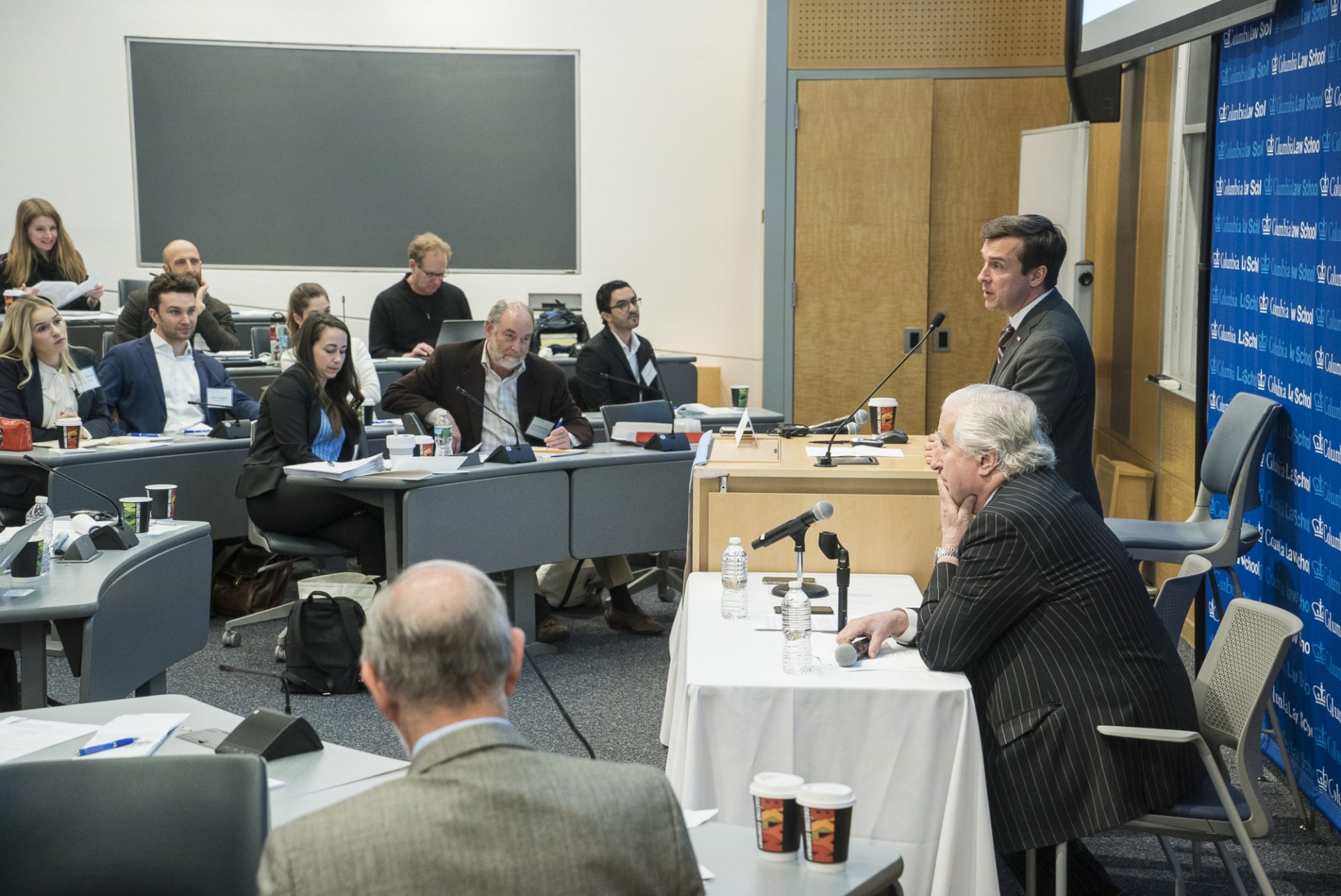 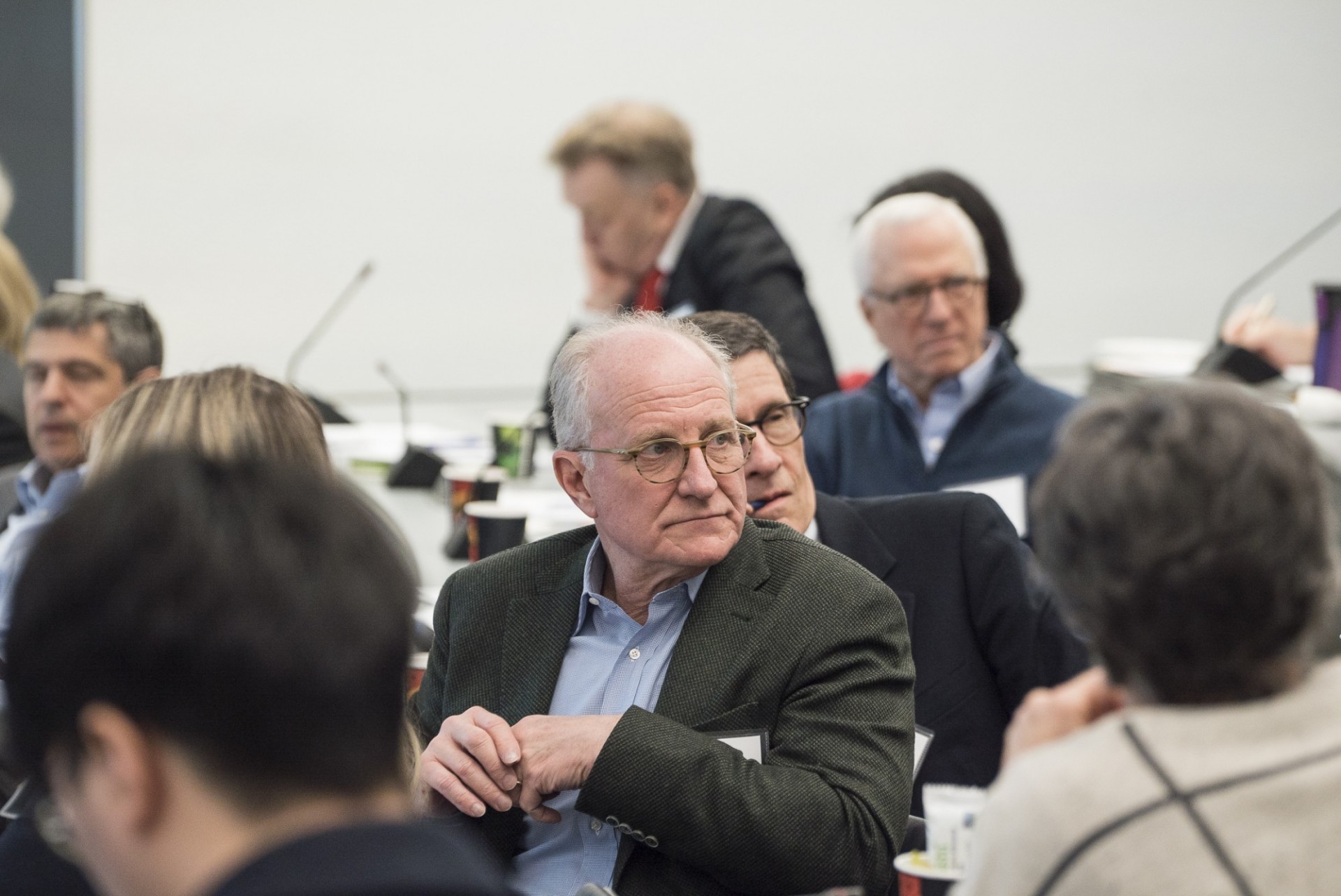 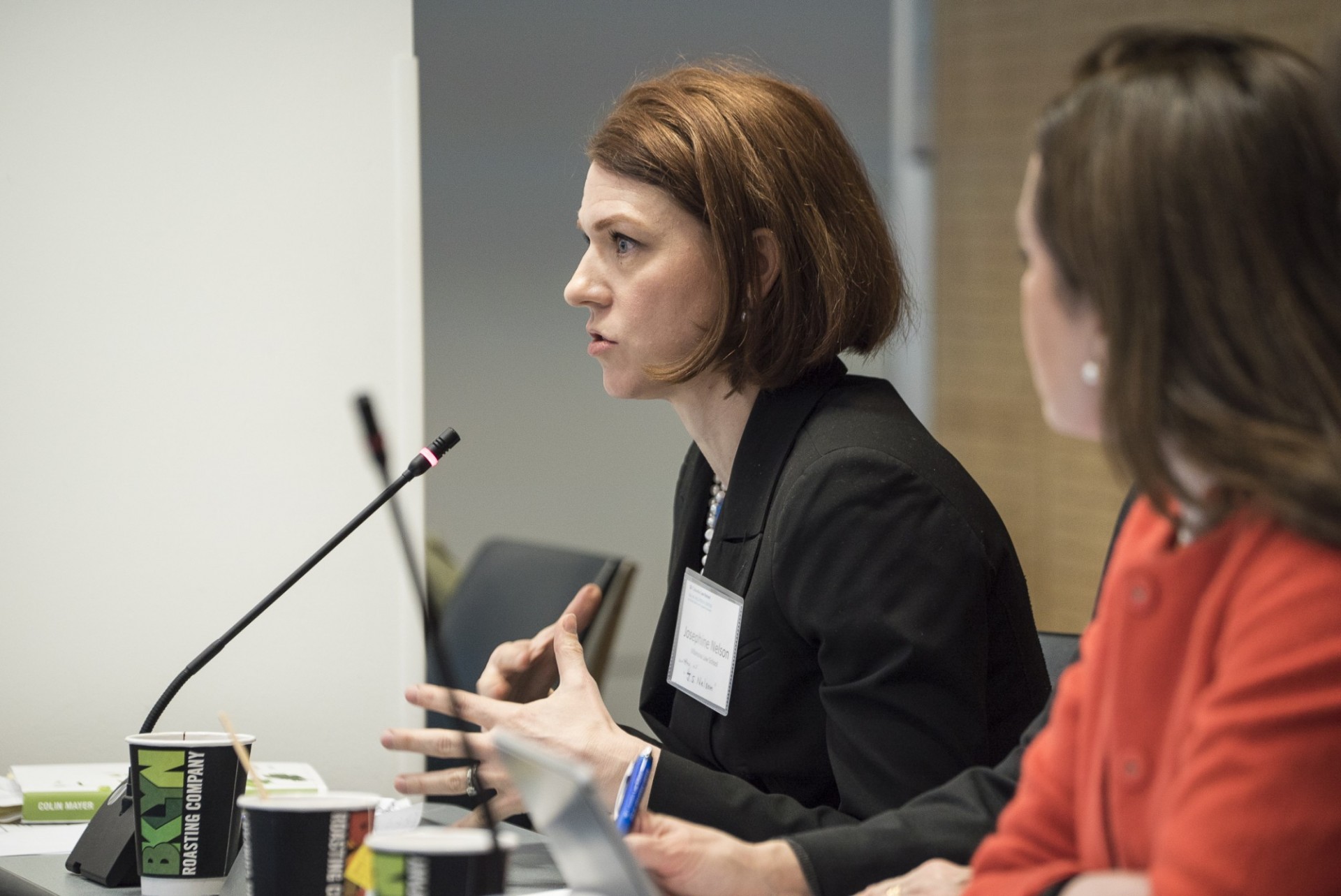 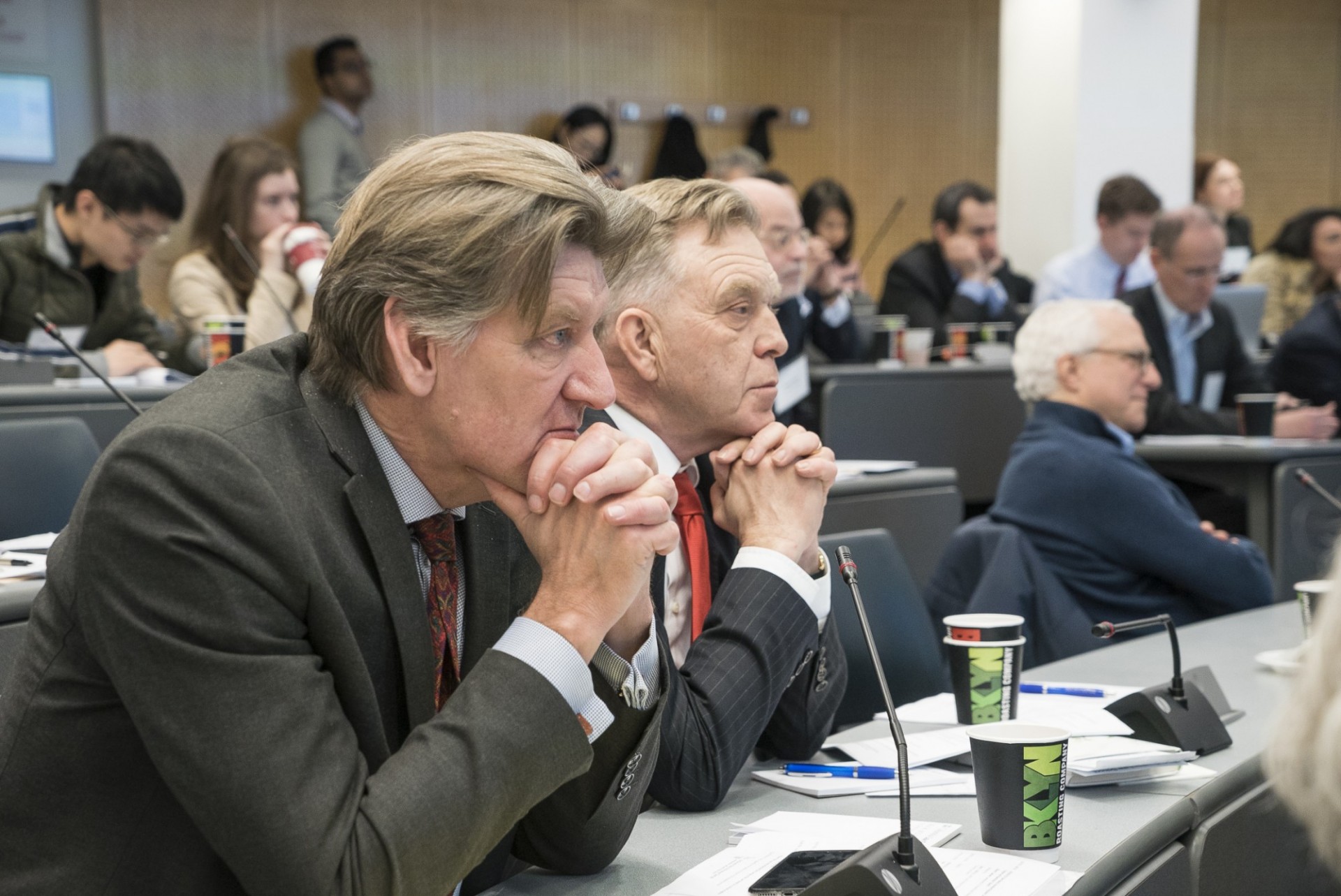 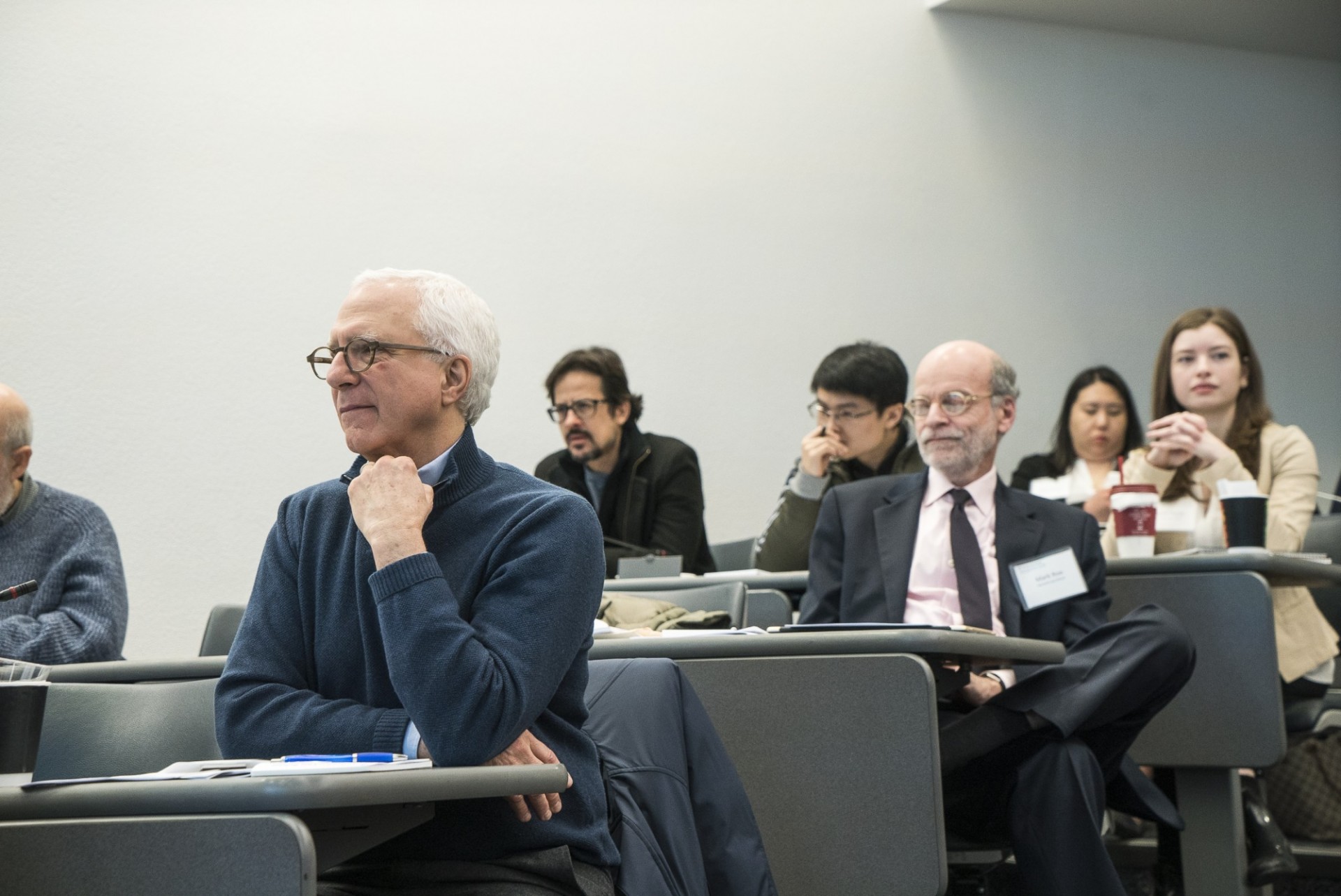 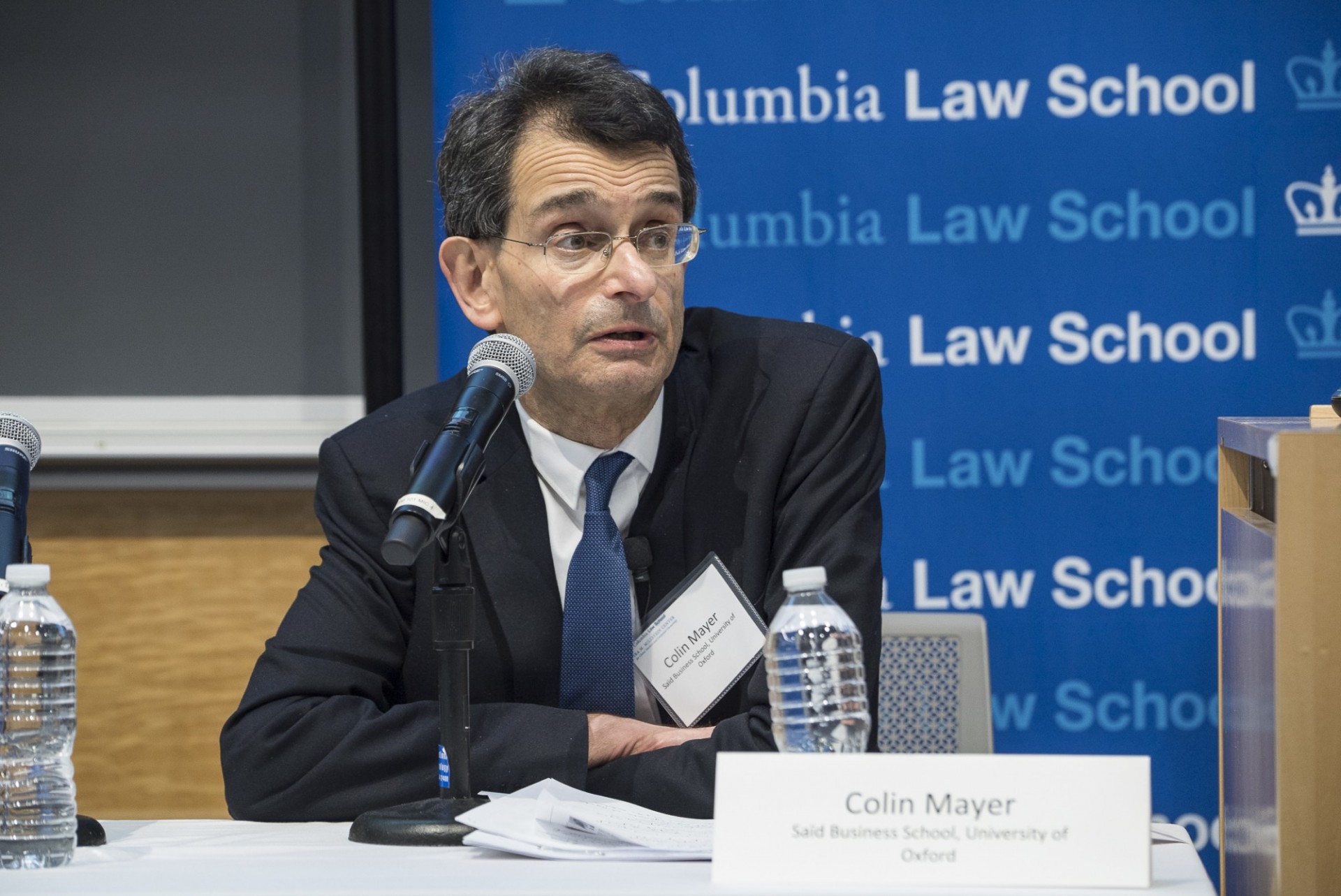 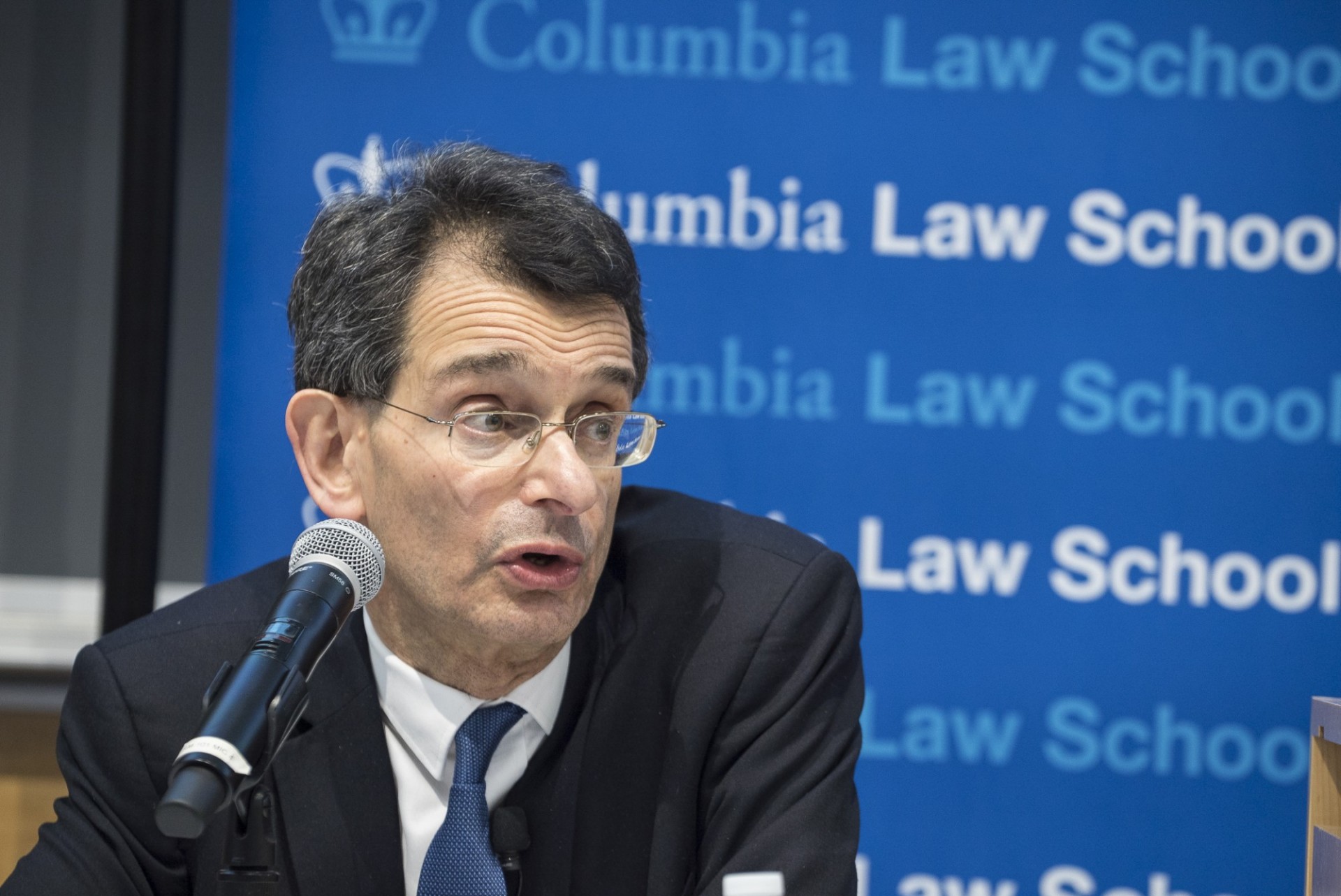 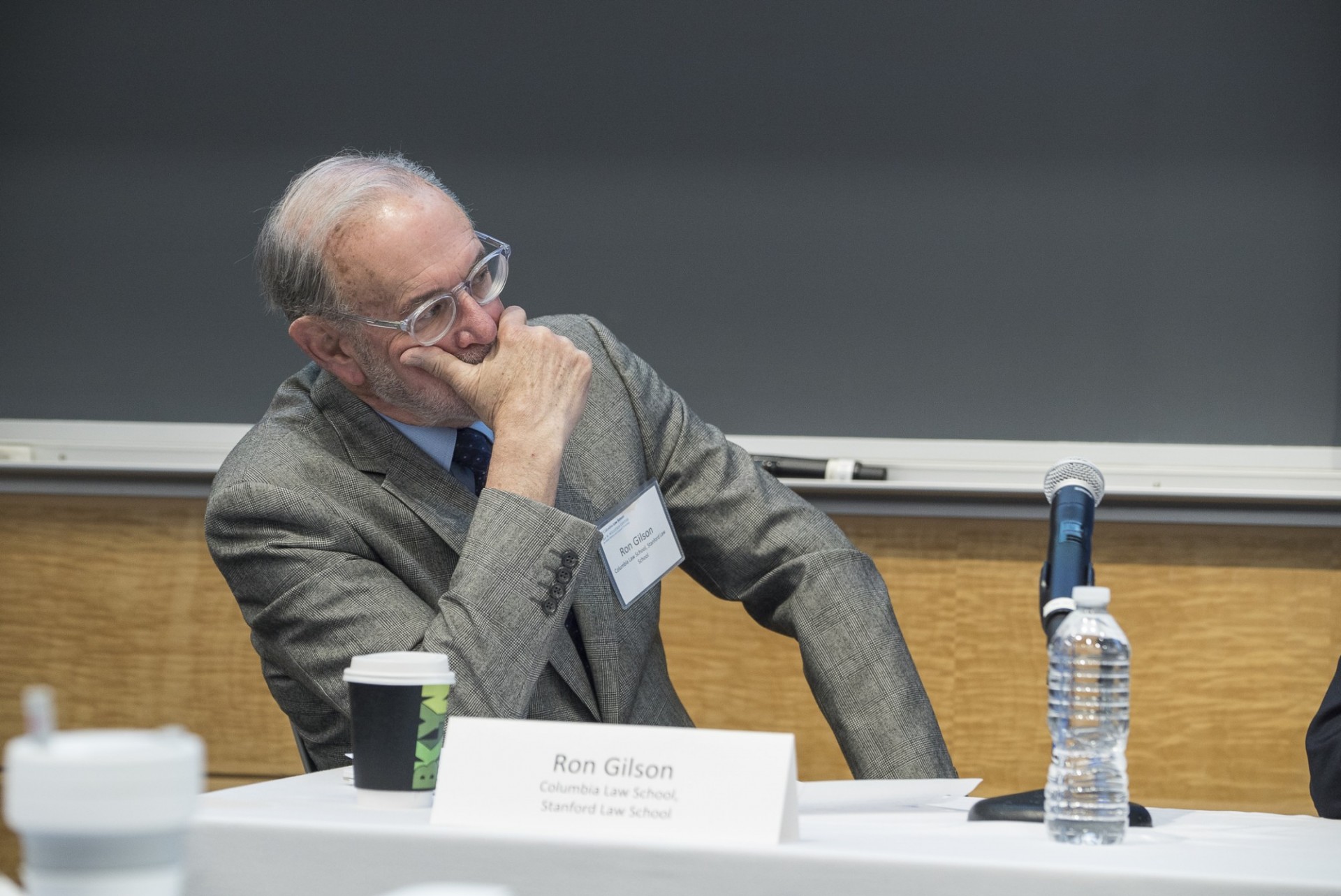 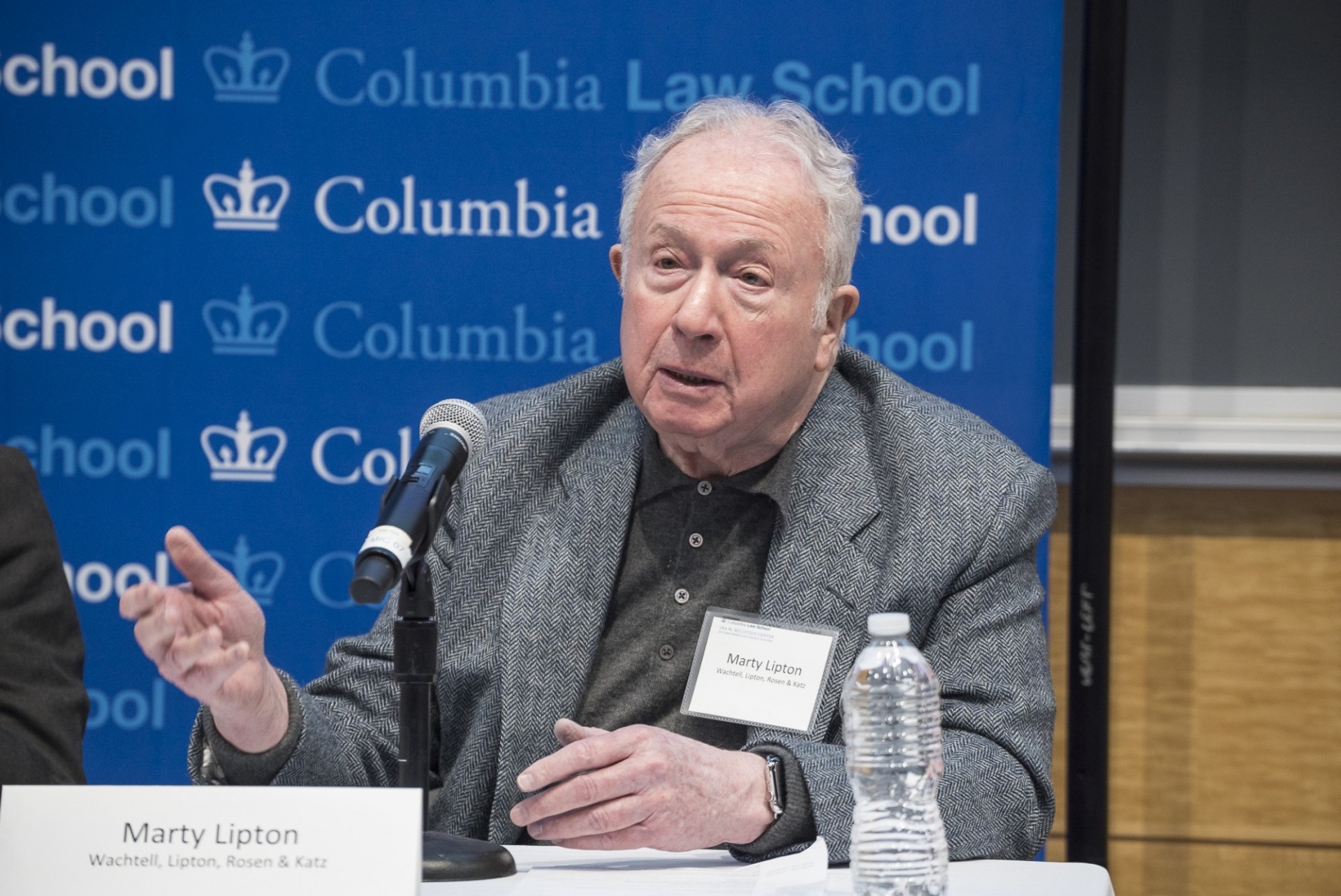 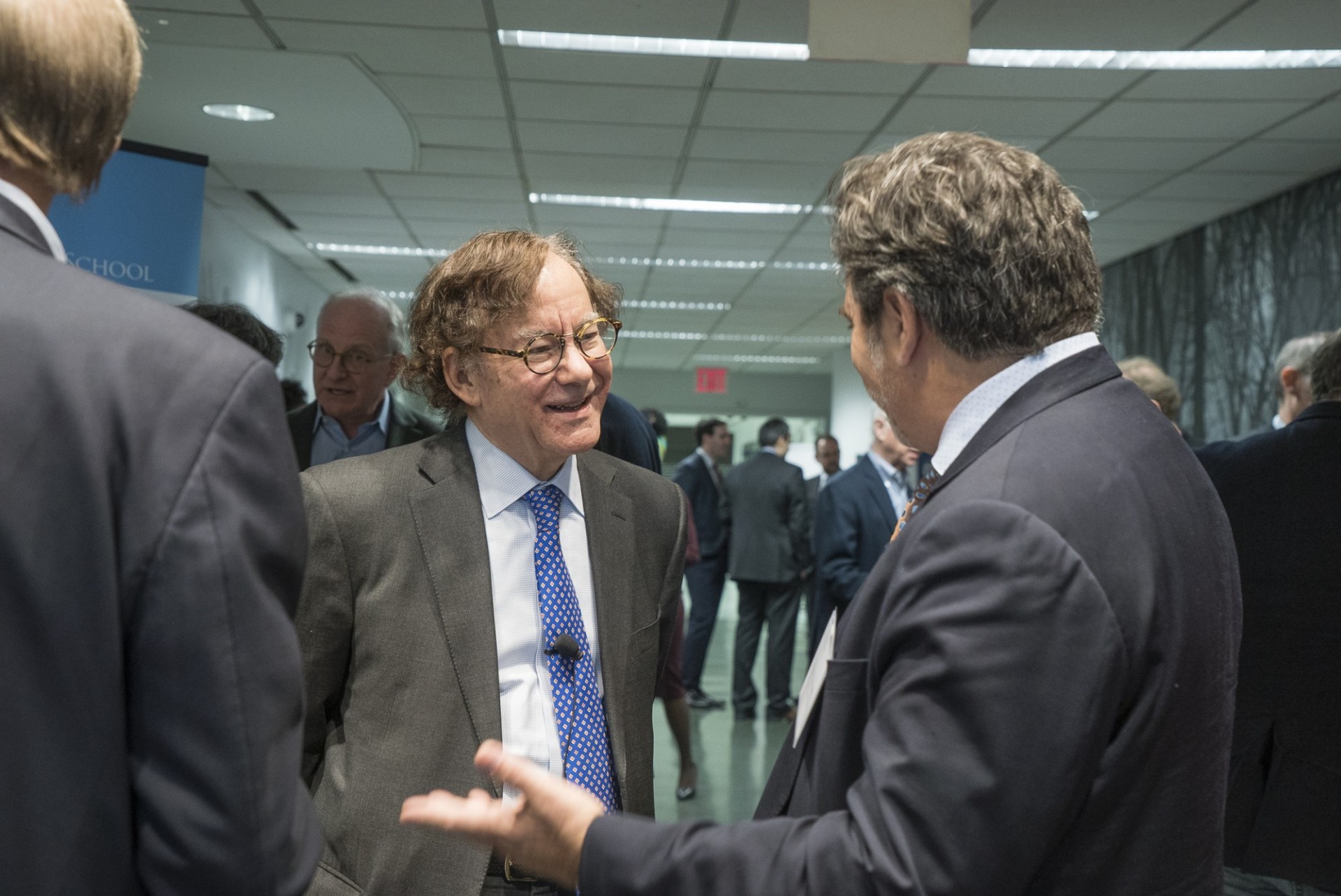 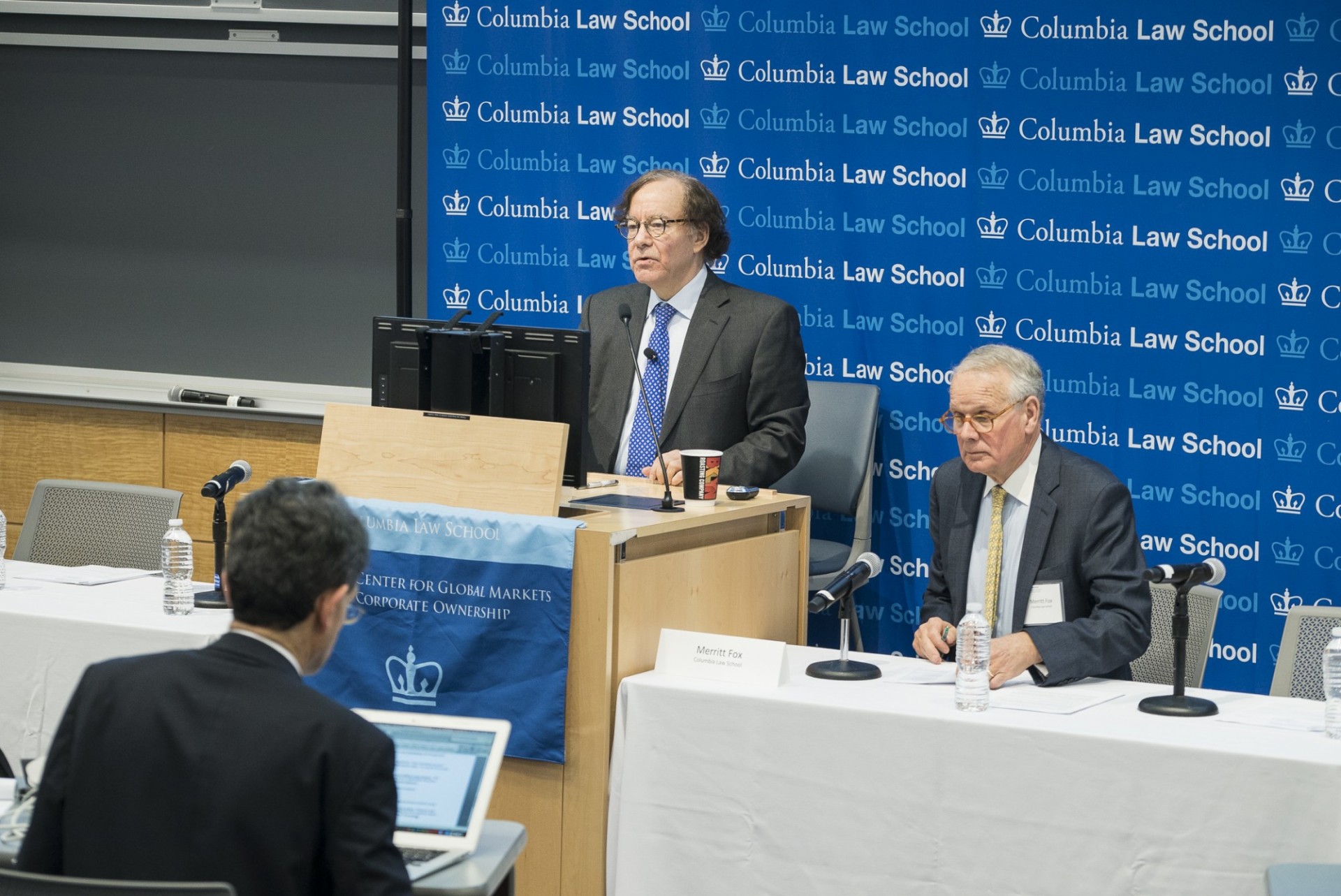 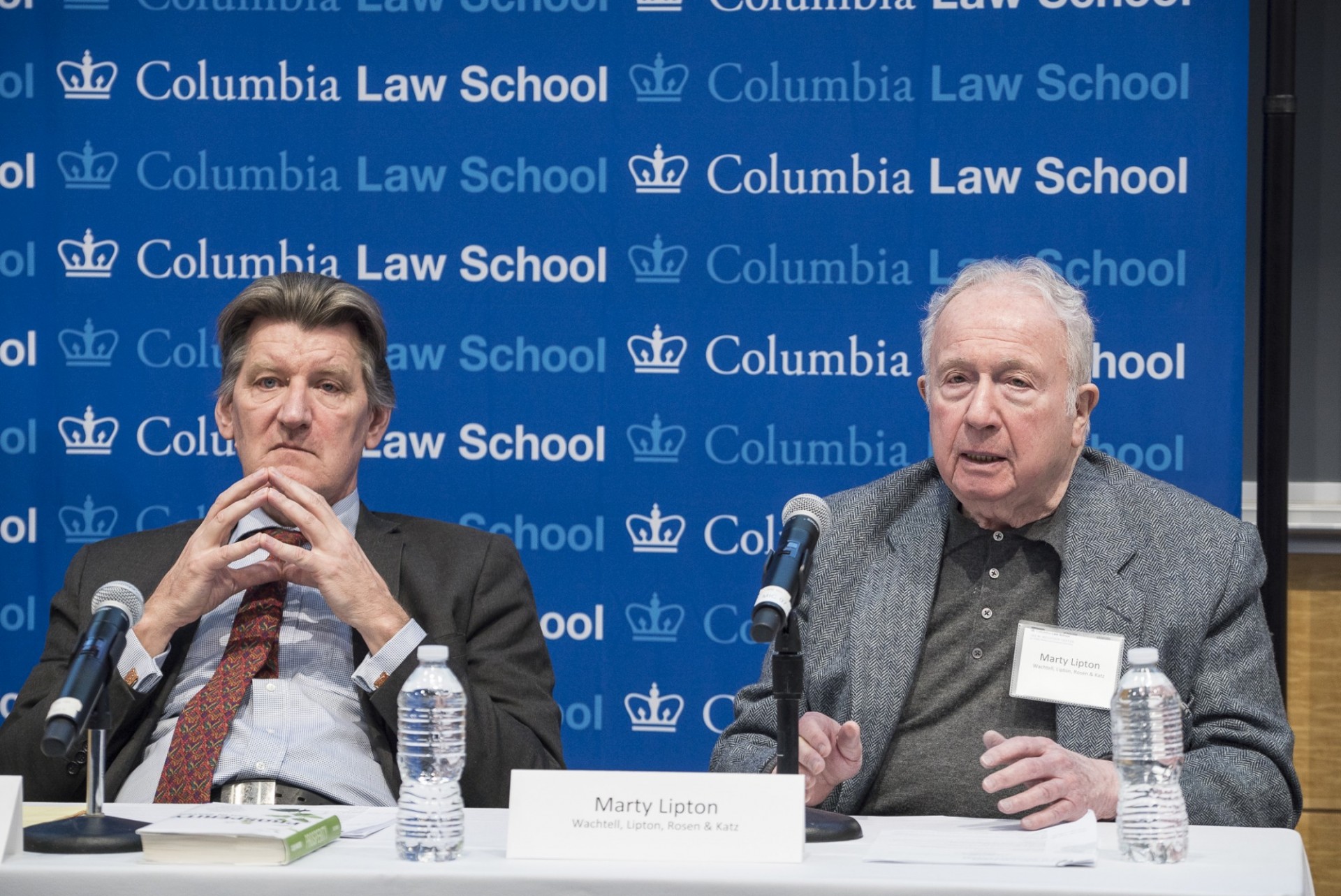 To begin exploring these counter-narratives, and to design a research agenda around them, the Millstein Center convened corporate governance experts at its March 1, 2019 conference, Corporate Governance “Counter-narratives”: On Corporate Purpose and Shareholder Value(s), to discuss and debate prominent “counter-narratives” being put forth. The “counter-narrators” included Saïd Business School Professor Colin Mayer, who recently organized a British Academy project on The Future of the Corporation and finished a book called Prosperity: Better Business Makes the Greater Good, and Chief Justice Leo Strine of the Delaware Supreme Court, who wrote a series of articles describing the reality of shareholder power and calling for better use of this power (“investing for the long-term”). SEC Commissioner Robert Jackson, a former Columbia Law Professor and former Executive Director of the Millstein Center, delivered the keynote address.

The Millstein Center held the first in a series of roundtables following our March 1 conference on May 16, 2019 in partnership with Gibson Dunn. A small group of practitioners and academics convened to explore whether and to what extent Delaware law does (and should) allow for “long-term stakeholder governance” (as an alternative to the traditional shareholder primacy paradigm).

Discussions of long-termism and stakeholder governance dominate today’s corporate governance discussions. Both doctrines are held up as the solutions to the major problems facing our corporations and society at large. Debate continues, however, as to whether Delaware law and the business judgment rule allow boards of directors to make decisions on any basis outside of creating immediate shareholder value. How much freedom does the law give to boards to consider whether benefits to non-shareholder constituencies may ultimately serve as investments in downstream shareholder value? What kind of record needs to be made for a board to conclude that taking an action having a more immediate positive impact on non-shareholder constituencies creates long-term value for shareholders? Can the “shareholder” include those holding through large index funds like Vanguard or Fidelity? If this type of stakeholder decision-making is adopted in the name of maximizing long-term shareholder value, do boards have too much wiggle room to pursue “non-Revlon” M&A transactions and long-term strategies that destroy shareholder value without being held accountable.

The roundtable discussion explored all of these questions, and the insights that arose will help to shape the direction of the Millstein Center’s Counter-Narratives Project going forward.

The Millstein Center hosted a roundtable with Professor Colin Mayer, of the University of Oxford’s Saïd Business School, to explore his work with the British Academy’s Future of the Corporation Programme on corporate purpose and how business can be reconceptualized to meet the needs of the 21st century.

A small group of business leaders, academics, regulators and practitioners workshopped concrete ideas and policy recommendations for how to adapt the Programme’s “Principles to Promote the Corporation of the Future” to the U.S. context.

The group focused primarily on the following Principles:

The Future of the Corporation with Sir Paul Collier and Colin Mayer - October 16, 2019 | New York, NY

The Millstein Center hosted a discussion on the Future of Capitalism, where we explored how capitalism and business might change to work better for society. Two of the leading scholars in this area, Oxford business professor Colin Mayer and Sir Paul Collier, a professor of economics and public policy at Oxford, shared insights from their new books, Prosperity: Better Business Makes the Greater Good and The Future of Capitalism: Facing The New Anxieties.

Following Professor Collier and Professor Mayer’s presentations, they were joined on a panel with Alan Schwartz, Executive Chairman of Guggenheim Partners, and Steve Pearlstein, business and economics columnist for The Washington Post, to provide commentary and facilitate discussion. The Millstein Center's Executive Director, Kristin Bresnahan, moderated.

An edited transcript of the event, available here, was published in the Spring 2020 issue of the Journal of Applied Corporate Finance.

“Shareholder primacy” has long been at the center of corporate governance, standing for the proposition that the primary responsibility of corporations is to increase value for the company and its shareholders. Recently, the Business Roundtable—an association of leading US CEOs—released a declaration that suggested a different corporate purpose, framed in terms of the need to deliver value to all stakeholders and to drive sustainable growth, a move away from shareholder primacy.

Will this declaration affect the operation and governance of US businesses? Is the statement a sign of a true commitment, or merely empty rhetoric fashioned to respond to the political moment?

This event was co-sponsored alongside the Richard Paul Richman Center for Business, Law, and Public Policy.

One increasingly important category of “counter-narratives” to the traditional shareholder primacy model is in the area of climate. Institutional investors are increasingly focused on “extra-financial performance” as a predictor of long-term success of companies. Topics like climate change, CO2 emissions reduction, respect for the environment, labor rights, and diversity are increasingly factored into investment decisions.

Recognizing these trends, the Millstein Center, in partnership with LeaderXXchange, conducted a global survey of investors and directors to understand how—if at all—investors and board directors incorporate climate-related issues in their investment decision-making and their oversight responsibilities, respectively.

One of our goals in conducting the survey was to understand and assess how ESG issues impact investment and boardroom decisions. The survey collected data on a broad range of topics, including respondents’ views on:

A jointly-prepared executive summary of our findings was presented by our partners at LeaderXXchange at an event in Paris with over 150 attendees.

Our talk on "The Future of Capitalism" with Sir Paul Collier, Colin Mayer, Alan Schwartz, and Steve Pearlstein (Oct 16, 2019)

(212) 854-3077
millsteincenter@law.columbia.edu
Our founder, Ira Millstein, on his vision for the Center
Tweets by MillsteinCenter
Back to Top